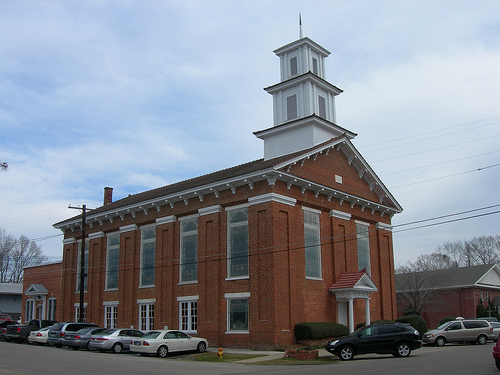 Methodism in Wetumpka can be traced back as early as Alabama’s 1819 statehood. Circuit riders served local congregations as early as 1820 in private homes and outside in camp-style meetings. In 1837, the Wetumpka Station was designated and, over the years, has been known as the Methodist Episcopal Church South, the First Methodist Church and, as it is known today, the First United Methodist Church. The first-known Methodist house of worship in the city was located on West Tallassee Street before moving to the wooden frame building on Tuskeena Street, across from where the Family Life Center now stands.

The construction of the present Sanctuary building began in 1853 and it was completed in 1854. The bricks for the building were graciously donated. In the Sanctuary, there was one center aisle with two side aisles and a seating capacity of 500, since there was no chancel area. It is essentially the same now as when built. In the front, there was a small organ on the left and a large stove on right. The Lancaster Memorial Bell was installed in the steeple in May 1901. The building was remodeled in 1909.  Where there had been two front doors, one center door was installed. Beautiful stained glass windows replaced the old clear glass and new light fixtures were added.  Mosaic tile was laid in the Vestibule. The cracked walls and painted columns were replaced with new plaster and pilasters of semi-Doric design. The pulpit, chancel rail and all woodwork were finished in a dark oak.  The golden oak organ was moved to the basement, a new heating system was added, and, in 1910, a lovely pipe organ was installed. The plain, straight back pews were replaced with curved, embellished oak pews. A brass rail framed the choir loft and, later, a pleated maroon velvet curtain was hung from the rail.

In addition to the Sanctuary, the property has been home to parsonages, the Education Building and the Family Life Center. The 1957 Education Building houses Sunday School classrooms, a nursery, administrative offices and an archives room.  The most-recent parsonage was sold and moved to provide the space for the Family Life Center, which was dedicated in 1999.  The FLC has served as a multi-purpose space for numerous gatherings, classrooms and Wednesday night suppers.

A major renovation to the Sanctuary was undertaken in 1972. The striking results were evident: sunlight, softened by the stained glass windows, shone on newly-painted woodwork and walls, highlighted the gold carpet and was reflected in the warm glow of the refinished oak pews. The chancel was remodeled to make it more functional and provide room for a larger choir. The pulpit was moved from the center and was balanced by a lectern on the opposite side. The communion rail was divided, giving direct access to the altar, which, properly, became the dominant feature of the Sanctuary. Apart from replacing the gold carpet with maroon, the Sanctuary remains the same today as it has been since 1972. In 1982, a memorial carillon was placed in the Narthex. It played hymns daily as well as special chimes for weddings and tolls for funerals. In 2009, it was struck by lightning and replaced with a new carillon. The organ with its “pencil-style” pipes was restored in 2006. The decorative pipes were deemed by the restoration company as some of the most intricately-adorned in the Southeastern United States.

The Chapel was dedicated in 1984. It occupies the space that was known as the J. Bruce Airey Men’s Sunday School Class. The class still meets in the Chapel, which was designed to mirror the appearance of the Sanctuary and employed some of the antique chancel furnishings from the pre-1972 Sanctuary renovation. In 2009, a new grand piano was purchased for the space.

Also, in 2009, the Fellowship Hall, originally known as the basement, was renovated. A new floor, crown moulding, chandeliers, kitchen reconfiguration, coffee bar and barrier-free restroom have made it a lovely, functional space for receptions, teas and other gatherings. In October 2009, the trustees approved renaming the space Wesley Hall, honoring the founder of Methodism in America.

There have been periods of hardship as well as eras of prosperity and growth. As First Church continues to build a foundation for the future, may we always “enter to worship and depart to serve.”